Terrifyingly relevant with the near-weekly mass shootings around the country, The Santa Rosa Imaginists offers a new production centered on gun violence in America.

Gun violence never loses its relevance in the United States. A country obsessed with the right to bear arms, the United States has 120 civilian-owned firearms for every 100 civilians, more than double that of Yemen, the second highest country at 53 per 100 according to the BBC. The price of widespread gun ownership is high. America leads the world with the highest rate of mass shootings and skyrocketing gun-related homicides and suicides.

“Someone Dies Again”, written by the famous Hungarian director Árpád Schilling, is a surreal story of a grieving family who lost a child. An international collaboration in the making for nearly a decade, the play features teachers from Santa Rosa Junior College, a counselor and an alumnus as key players in its production.

Brent Lindsay founded the Imaginists with his partner Amy Pinto in 2001. Beginning as an experimental theater project, it grew to become internationally recognized for its unique approach to performing. The Imaginists work to redefine theater from the ground up, describing their mission on their website at “creating vital space for imagination, ideas and freedom. They dedicated time both to the international stage and to outreach to the community on the ground.

Lindsay has been on SRJC’s Theater Department Advisory Board since 2015. Despite his down-to-earth and collected nature, he could be spotted as a performer from a mile away. His conversations are lively, his hair is long and silver, and he enjoys talking about theatre.

Lindsay met Árpád Schilling in 2015 after managing to impress a well-known Hungarian critic. The famous playwright visited Santa Rosa in 2015. At the time, the country was in political turmoil due to gun violence. The Baltimore riots were in full effect and Andy Lopez had been killed just over a year earlier. Morbidly fascinated by the state of the United States and in love with the Imaginists team, Schilling decided to pursue a collaboration with Lindsay.

“I could have foreseen all this. It’s very familiar, and yet it takes it to a new level. The bar is rising. It’s exactly what we all hoped for, to challenge ourselves,” Lindsay said. “He’s challenged by the culture and where we are and who we are. It’s an incredible project.

After “Someone Dies Again” was conceived, Lindsay asked one of her actors, Tessa Rissacher, to find a costume designer for the play. Having attended SRJC in 2004 and 2014, Rissacher reached out to the drama department to find the best match.

Although new to Santa Rosa, Trivett spent 15 years in New York City working and teaching costume design. A veteran with 20 years of experience, Trivett has designed costumes for theatre, opera and film. In her first year as a full-time SRJC teacher, Trivett is excited to expand her professional network in a new job. So when an email arrived in her inbox from an alumnus looking for a costume designer for a local production focused on a relevant national issue, she had to look into it.

Rissacher, on the other hand, is a veteran member of the Imaginists. Having been a student in the classes Lindsay occasionally taught, she eventually found her way to a production at the Imaginists’ studio where Lindsay recognized her. He gifted her part of their 2009 production of Ubu Rex, a satirical comedy by the Polish composer Krzysztof Penderecki. Rissacher agreed and has been part of many Imaginist plays since.

“It was a beautiful artistic house,” she says wistfully. “To be able to go in and out and gain experience and training and joy in doing things.”

Rissacher is cast as “The Lecturer” in “Someone Dies Again”. In his words, the play is about “how we deal with the fundamentally unacceptable heartaches of life”.

“One of the really amazing things about the Imaginists is their dedication to original work,” Rissacher said. “Their process is much more fluid and organic, creating something that has never been seen before.”

Lindsay thinks the piece is very relevant, especially for students. In the past two weeks, two mass shootings have taken place in Buffalo, New York and Uvalde, Texas, killing 31, including 19 children. “I knew that would always be an issue that we would look into. I never thought it would be nearly where we are right now,” Lindsay said solemnly.

Thematically heavy, only time will tell how the show will be received. “Someone Dies Again” just wrapped its run in San Francisco and is now coming to Santa Rosa, hosted in the Imaginists’ studio space at 461 Sebastopol Ave. Tickets are available for shows on June 2, 3, 4, 9, 10 and 11, all at 8 p.m. 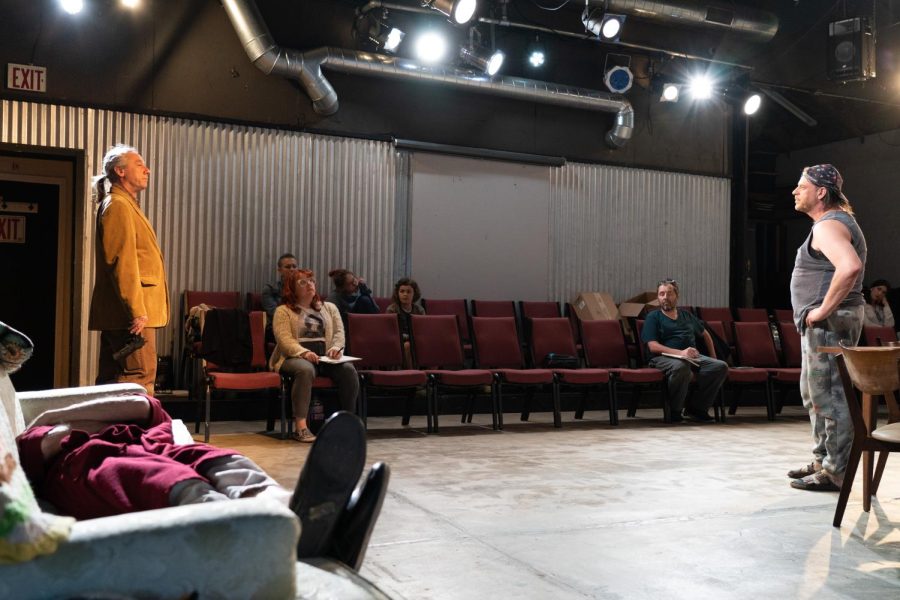