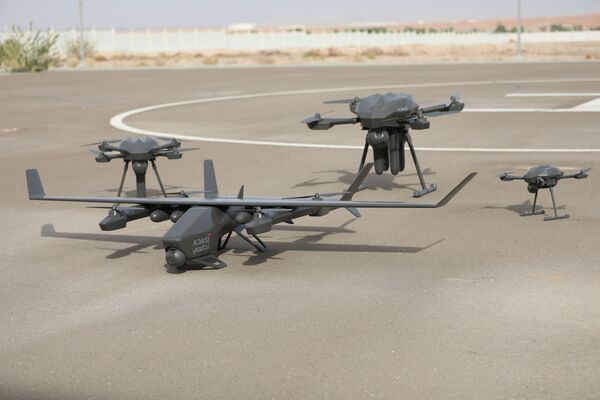 Autonomous systems specialist ADASI expects to complete the development of its QX-1 and QX-3 roving ammunition within “one to two months”.

Speaking at a press conference on September 22, Mohamed Al Nuaimi, senior program manager, engineering and technology, at ADASI, said the systems were undergoing final qualification tests before going into production.

The QX series utilizes quadcopter core platforms and is designed to support forces operating at the tactical level of the battlespace, providing precision target engagement capability. Rather than being stray munitions per se, the larger QX-2 and QX-3 systems are designed to carry gravity-dropped bombs and conduct multiple missions, while the QX-1 is a “kamikaze” system with an integrated warhead.

Al Nuaimi said the QX-2 is in production and has been delivered to the United Arab Emirates (UAE) Armed Forces. It can carry a single 1.5 kg bomb, while the QX-3 will be able to operate with four. Al Nuaimi said the guidance kits that are installed on the warheads are a differentiator from similar systems that drop unguided munitions.

The QX-2 and QX-3 can undertake fire-and-forget missions as a camera is built into the nose of the warheads and this is linked to an electro-optical guidance system.

The QX-1 is fitted with a 500g warhead and can use impact or proximity fuzes, or be fired by command.


Interested in subscribing, see what we are up to

Request a free consultation to find out how Janes can provide you with interconnected and assured open source information.